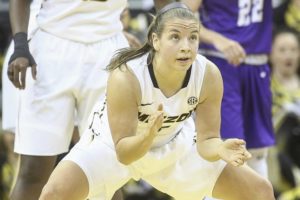 No. 25 Mizzou suffered its first loss of the season on Thursday night as No. 17 Washington prevailed, 79-66. Sophomore forward Cierra Porter led the Tigers with 16 points and has now scored in double figures in all three games to begin the 2016-17 campaign.

Washington hit 15 three-pointers and shot 45.5 percent from beyond the arc to stave off Mizzou. The Huskies’ All-American point guard Kelsey Plum poured in a game-high 32 points behind a 10-of-23 effort from the floor.

Mizzou got off to a hot start on Thursday with a strong opening quarter. Redshirt senior Lindsey Cunningham drilled a contested three-pointer to cap an 8-2 Mizzou run that handed the Tigers a 16-13 advantage less than seven minutes into the game. Redshirt senior Lianna Doty ripped away a steal and finished a layup in transition to give Mizzou a 26-21 lead at the quarter break. Doty has a team-high 10 steals through three games this season.

Washington buried seven three-pointers in the second quarter to swing the momentum, but Mizzou kept pace with tough buckets. After the Huskies surged ahead 37-30, Lindsey Cunningham nailed a three-pointer and Sophie Cunningham knocked down a pair of free throws to slice the deficit to two. The two squads traded baskets down the stretch, but another Washington trey allowed the Huskies to take a 46-39 advantage into halftime.

Washington pushed ahead 62-47 in the third quarter and maintained its lead throughout the second half. Schuchts scored eight of her 12 points in the final 20 minutes, but Mizzou could not mount a late comeback.

Mizzou finishes the Preseason WNIT 2-1 and now turns to a home game next Tuesday as the Tigers host Indiana State. Tip off is set for 7 p.m. on SEC Network Plus.