After 66 years, a fallen Missouri Korean War soldier will be laid to rest on Saturday. Army Corporal Donald Matney, of the southern Missouri town of Seymour, was 18 when he was assigned to Company H, 2nd Battalion, 19th Infantry Regiment, 24th Infantry Division.

He was killed in battle during the early days of the war on July 20, 1950. Matney’s unit attempted to delay the capture of a town near Taejon, South Korea by attacking enemy forces. Enemy infantry and armor units were able to force the division out of the town and block withdrawal routes. Matney was reported missing in action following the attacks. 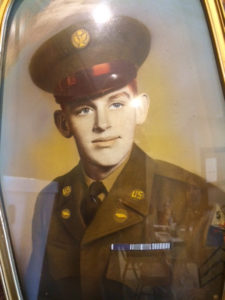 According to the Defense POW/MIA Accounting Agency (DPAA), unidentified remains were recovered by a local resident in Taejon in March of 1951. They were moved to the United Nations Military Cemetery in Tanggok, South Korea, where identification was attempted. Due to a lack of substantiating evidence, the remains were not able to be identified and were buried at the National Memorial Cemetery of the Pacific in Hawaii.

In May 2016, the remains were exhumed from the cemetery and sent to the laboratory for identification. To identify the remains, scientists from DPAA used dental, chest radiograph comparison and anthropological analysis. On November 10, the DPAA announced that Matney’s remains matched his records and circumstantial evidence.

“We must never forget that freedom is not free. Welcome home, corporal. Thank you for giving your all for us. We owe you a debt of service we will never be able to repay,” says Hartzler. “As a nation, we are indebted to the service he made and we are grateful for the freedoms he fought to preserve. His memory will live forever as one of honor and courage.”

“After 65 years, this young Missouri soldier who gave his life for his country is being brought back home,” says Nixon. “The passage of years does not diminish the honor we pay to Corporal Matney for his sacrifice.”

Nearly 8,000 Americans are unaccounted for from the Korean War. Identifications continue to be made from remains that were previously returned by North Korean officials or recovered from North Korea by American recovery teams.