(NASCAR)—The longest season in pro sports comes down to one race, one day short of nine months after the first points race of the year.  Columbia’a Carl Edwards has to finish ahead of Jimmie Johnson, Kyle Busch, and Joey Logano if he is to win his first championship in NASCAR’s top series.

Thirty-six other drivers will be on the track trying to win the race. But only those four can compete for the championship.  The one with the highest finish gets it.

Homestead-Miami is a challenging rack for all four.  Here are some thumbnails going into the run-off next weekend: 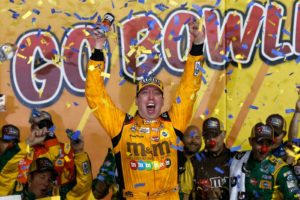 Kyle Busch, the reigning NASCAR champion.  He’s 31, has 38 career wins, but at Homestead his average finish is 21.09 in eleven races.  He won last year’s race. He has four top tens in his eleven starts.  His last four finishes at Homestead have been 4-7-39-1.  He is the only Joe Gibbs Racing teammate of Edwards’ to make the final four. 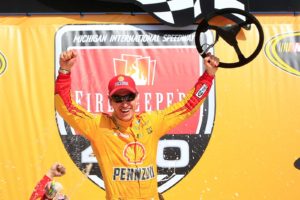 Joey Logano, the youngest in the field at 26, has 17 career wins. His highest finish in the season points is fourth, in 2014.  He has yet to win at Homestead but he is coming off a big win this weekend at Phoenix.  His average finish is 17.1 and he has finished 14-8-16-4 in his last four runs there. 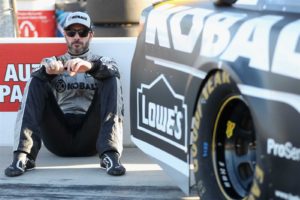 Jimmie Johnson, 41, wants to win his seventh NASCAR championship, tying Richard Petty and Dale Earnhardt, Sr.  He won five straight championships, 2006-10 and got his six one in 2013.  This is his first appearance in the championship race under the current format.  Johnson has 79 victories, the most of any active driver, sixth on the all-time winner’s list, but he has yet to win at Homestead where his average finish is 14.07.  His last four races have seen finishes of 36-9-9-9.

Carl Edwards has the best record of any of the competitors at Homestead.  Edwards turned 37 this year. He won his 28th race at Texas two weeks ago in a must-win situation to make the final four.  He was the runnerup in points to Johnson in 2008 and tied Tony Stewart in 2011 but lost the championship because Stewart had more victories that season.  His average finish in a dozen Homestead races is 9.25.  He won the race there in 2008 and in 2010. He was second in 2011.  But he’s on a bad streak with finishes of 11-34-12-12 in his last four times there.

Logano won Sunday’s race at Phoenix.  Busch was second.  Edwards was 19th and Johnson finished 38th after a crash.

Edwards could become the second driver to take the top NASCAR championship.  Rusty Wallace won it in 1989.

(Formula 1)—Lewis Hamilton picks up his third win in a row and maintains the pressure on teammate Nico Rosberg going into the last race of the season next weekend in Abu Dhabi.  Hamilton proved to be the master in the wet at the Grand Prix of Brazil, beating Rosberg by more than 11 seconds for his 52nd win, one more than Alain Prost.  He moves into second on the all-time F1 wins list.  Michael Shumacher had 91.

The race began in the rain with competitors behind a pace car—they’re called “safety cars” in F1—for eight laps.  The safety car took the track only five laps later after Marcus Ericsson’s crash.  Full racing resumed after six caution laps but was stopped after Kimi Raikkonen crashed on the mainstretch.   The restart more than half an hour later was run behind the safety car for seven laps before the race was stopped by the weather.

The second restart came after another half-hour delay.  Within twenty laps another crash brought out the safety car for another seven laps.  The race to the finish saw Hamilton and Rosberg finishing 1-2 again.

Rosberg’s points lead drops to a dozen points.  But if he can win the championship next weekend if he finishes third.

(IndyCar)—The unofficial start of the 2017 IndyCar season is only three months away—testing at Phoenix International Raceway February 10-11—but a lot of driver/team combinations are still undecided.

Penske Racing’s lineup is nailed down.  Ed Carpenter Racing has its two drivers but is looking for one driver who will do road courses and streets because Carpenter is strictly an oval-guy. Both of Foyt’s drivers from 2016 are reportedly gone with no replacements named although there are reports one of them will be Conor Daley. One seat remains open at both Ganassi Racing and at Andretti Autosport. Schmidt Peterson Motorsports isn’t sure who will be in the car that Mikhail Aleshin drove this year but James Hinchcliffe will be back in ’17.  . Sebastian Bourdais has left KVSH Racing for Dale Coyne, leaving KVSH without a driver so far.  Rahal letterman Lanigan is mulling over a second fulltime team.

Speaking of Hinchliffe—He’s one of five contestants remaining for the finals of Dancing With the Stars.  One of the five will drop out of contention after tonight’s public votes are tallied.

(From the past)—Word that Fiat-Chrysler is closing the Walter P. Chrysler Museum north of Detroit recalls the time more than six decades ago when Sam Hanks drove a Chrysler-powered Indianapolis 500 roadster to a new world’s closed-course speed record.  Chrysler was developing its 331-cubic inch hemi V8 and dropped one into a Kurtis Kraft KK500A roadster.  On June 30, 1954, Sam Hanks drove the car around the 4.7-mile Chrysler test track at 182.554 mph.  He was asked how fast he could have gone and he replied, “I don’t have to go any faster than I just did.”  He said he’d come back if someone broke the record, but it never happened.  Hanks won the Indianapolis 500 three years later. 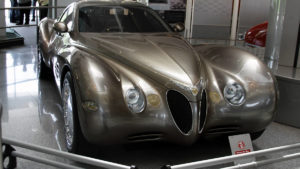 About 65 cars have been on display at the museum, including the 1995 Chrysler Atlantic concept car that remains a stunning design two decades later.  A lot of folks think Chrysler missed a big bet by not putting it into production.