Governor Jay Nixon (D) says Missouri exports are on pace to reach an all-time high this year. Newly released figures show that through September 2016, Missouri exports reached almost $10.6 billion. That exceeds the previous January to September total of $9.9 billion in 2014, when Missouri’s annual exports reached an all-time high of just under $14.2 billion. That was an increase of 49% from 2009, when exports were $9.5 billion. 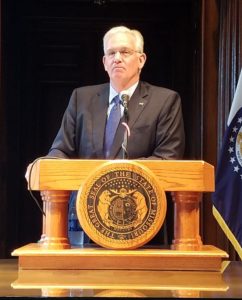 “In an increasingly competitive global marketplace, Missouri businesses – large and small – and our skilled workforce are proving they can grow exports and reach even more consumers around the world,” says Nixon. “To continue growing Missouri jobs and strengthening our economy, we need to keep expanding our international trade efforts and reaching new customers.”

Meanwhile, Nixon will lead a trade delegation to United Arab Emirates from Nov. 18 to Nov. 22. In the UAE, the governor will meet with high-ranking government officials to try and expand Missouri exports to the Middle Eastern nation.

The UAE was Missouri’s 22nd largest trading partner in 2015, receiving more than $76 million in Missouri goods and commodities. The largest categories of Missouri products exported to the UAE were fabricated metal products, transportation equipment, electrical equipment and appliances, machinery, computer and electronic products.

Joining Gov. Nixon on the trip will be First Lady Georganne Nixon; Mike Downing, Director of the Missouri Department of Economic Development. The Missouri delegation also will include Al Purcell, chairman of the Hawthorn Foundation, a nonprofit organization dedicated to promoting economic growth in Missouri; Marie Carmichael, chairwoman of the Missouri Development Finance Board; David Adkins, President and CEO of the Council of State Governments; and representatives of St. Louis University. Several Missouri businesses will also be represented, including Burns and McDonnell, of Kansas City; Holtec Gas Systems, of Chesterfield; Kit Bond Strategies, of Clayton; Premier Proteins, of Kearney; and Scienco/FAST, of Sunset Hills.

Travel costs for the governor and Mrs. Nixon will be covered by the Hawthorn Foundation. State taxpayer funds will not be used.