Republican Roy Blunt won a second term in the U.S. Senate with a larger than expected win over Democratic challenger Jason Kander Tuesday. 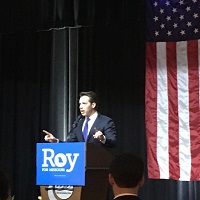 The crowd gathered at his election watching party at the Ramada Plaza Hotel and Oasis Convention Center in Springfield was giddy soon after it became apparent Donald Trump was closing in on the office of president.

With Trump over performing Blunt in the polls, it became apparent on election night the incumbent Senator would ride the coattails of the candidate at the top of the ticket.  Blunt gave Trump credit for expanding the map for Republicans.  “Donald Trump putting state’s in play that have not been in play for a long time” said Blunt. “Leading the ticket in state after state, setting new numbers in many states, with great performance on the part of voters who came out, who haven’t voted in past elections.”

Blunt was quick to run down a list conservative priorities he planned to pursue.  “I’m going to stand for principal on things like religious freedom, and health care that works for families, and more jobs and less government.  And I look forward to that.”  Blunt also made quick reference to conservative changes to the nation’s high court which are likely with Trump in the White House.   “I think the impact that a Republican President and a Republican Senate can have, looking to move the Supreme Court in a direction that is likely to be the direction of the court for 25 years, is critical.”

While Kander tried to portray Blunt as a Washington insider connected to special interests and lobbyists, Blunt successfully framed Kander as a rubber stamp for Clinton and President Obama.

It appeared that once the crowd at Blunt’s election watch party had sensed Trump had secured the White House and knew Blunt’s victory was official, it began to dissipate.

The Senator’s gathering was clearly the anchor spot for other Republican candidates in the region.  Missouri Lieutenant Governor elect Mike Parson spoke on stage and mingled with the crowd.  Attorney General elect Josh Hawley, a constitutional law professor at the University of Missouri who held his own election watch party in Springfield, introduced Blunt after they both entered the building at around midnight.

U.S. Congressman Billy Long, whose 7th District encompasses Springfield, also appeared at the Blunt gathering.  Long won his race by a dominant 68 percent.  He was very boisterous about Trump’s victory.  Long has been highly critical of other Republicans, including House Speaker Paul Ryan, who either declined to support the now President elect, or didn’t enthusiastically back him.