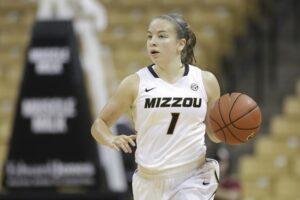 As a team, Mizzou was relentless on the glass, outrebounding Truman State, 49-24. Seven different Tigers corralled at least three rebounds in a team effort. Defensively, Mizzou collected 14 steals and forced 18 Bulldog turnovers. Head coach Robin Pingeton’s squad limited Truman State to an 25-percent shooting clip from the floor in the opening half to jump ahead quickly and build a comfortable lead.

After Truman State opened the contest with a three-pointer, Mizzou ripped off a 13-0 run to open a double-digit advantage early. The Tigers continually earned trips to the free throw line and capitalized on the opportunity, converting 18-of-23 free throw attempts in the first half. Cunningham went 10-for-10 at the charity stripe in the opening frame and had 15 points and seven rebounds by the break. After Michaelis beat the buzzer with a trey from well beyond the arc, Mizzou went into halftime with a 46-21 lead.

The Tigers continued to build their lead in the third quarter, capping it off with back-to-back transition threes from Chavis and Michaelis. Chavis added another three on Mizzou’s first possession of the fourth quarter to put the Tigers up 71-40 with 9:46 left and Mizzou coasted down the stretch.

After finishing the exhibition slate with a pair of wins by a combined 64 points, Mizzou now turns to the regular season, which officially opens Friday, Nov. 11 against Abilene Christian. The contest tips off at 7 p.m. at Mizzou Arena and serves as the opening round of the Preseason WNIT.