(NASCAR)—Carl Edwards and his crew, facing a must-win situation, got that win that moves him from dropping out of contention for the NASCAR title to a guaranteed spot in the run for the championship in two weeks. 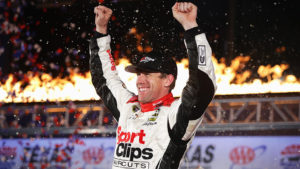 Edwards’ run toward the title seemed doomed after a tire failure last week left him a distant last in the eight-driver runoff for the final round of four competitors for the championship.  But he ran strongly all night, grabbed the lead coming out of the pits on lap 258 and held Joey Logano at bay for the final 36 laps.  The race was called after 293 of 334 scheduled laps when rain moved in for a second time Sunday.  The start of the race had been delayed almost six hours because of the earlier rain and NASCAR felt it would need two more hours to dry the track when the race was stopped at 10:13 p.m., CST.

Rain cost Edwards a chance to run for the championship last year when the Phoenix race was stopped early.  He was deeply disappointed the race was called because he thought his car would have put him in the Chase field if the track could have been dried and the race had been allowed to run its full length.

This will be the first time since 2011 that Edwards has qualified for the four-driver championship challenge.  Five years ago, Edwards and Tony Stewart finished in a points tie but Stewart won the championship because he had more wins that season.   He joins six-time NASCAR champion Jimmie Johnson in the Chase field at Homestead where he hopes to do his traditional victory backflip that he didn’t do at Texas because of the rain.  Edwards was interviews on NBCSN after learning he’d been declared the winner.

The other two drivers will be chosen by next weekend’s race at Phoenix.  Kevin Harvick, the 2014 NASCAR champion, is in a need-to-win position at Phoenix to join Johnson and Edwards in contention at Homestead.  Harvick has won five of the last six races at Phoenix and finished second the other time.

(IndyCar)—Pieces continue to fall into place for the 2017 season.  Juan Pablo Montoya has decided not to sign for a fulltime ride with another team and will take a one-race contract with Penske. The one race is the Indianapolis 500 which Montoya wants to win for a third time.

With Montoya off the table, other teams that had been considered possible landing places for him are starting to fill seats.  Ed Carpenter Racing will give J. R. Hildebrand his first fulltime IndyCar ride since his release from Panther Racing during the 2013 season.  He has posted three state top-ten finishes in the 500 and is best remembered as the driver who had a big lead on the final turn of the race in 2011 when he got into the wall in the last turn and finished second to Dan Wheldon. He’ll take the seat that had been occupied by Josef Newgarden, who has taken Montoya’s fulltime ride at Penske.

Takuma Sato is moving from A. J. Foyt Racing to Andretti Autosport, replacing Carlos Munoz, who is believed headed to Foyt.  Sato has been in IndyCar since 2010 after eight years on the F1 circuit. Sato drives Honda-powered cars and Foyt’s switch to Chevrolet for 2017 started his search for a job with a Honda-powered team.

Public voting on the couples to advance to the next round on Dancing With the Stars begins with the start of the show tonight and will continue until an hour after the show.  IndyCar driver James Hinchcliffe is still very much alive in the competition. Last week, in a Halloween-themed performance, he and his substitute partner Jenna Johnson racked up the first perfect score on the program’s season with their waltz.  His regular partner, Sharna Burgess, is recovering from a knee injury.  The season finale is November 22nd.  Hinchcliffe hopes to join Helio Castroneves as an IndyCar driver who has won the competition.

(Formula 1)—Formula One’s next-to-last race of the season is next weekend at San Paulo, Brazil.  The season ends November 27th with the Grand Prix of Abu Dhabi.