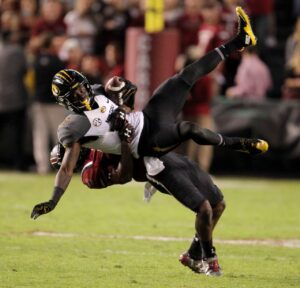 I’m not going to get down too much on the Mizzou football team after their 31-21 loss to the South Carolina Gamecocks.  At this point, it is what it is and for Barry Odom the goal is to coach up the younger players who he thinks can help this program moving forward and it’s time to look past the veterans on this team.

The defense improved in week two under Barry Odom’s watch with a  season-high in tackles for loss (nine) and sacks (four), but they struggled at the same time with a very good game from South Carolina.  The Gamecocks coaching staff did a great job of not putting freshman QB Jake Bentley in a position to fail.  He threw for 254 yards and two scores. Both of those TD passes came on third down and at one point Bentley was 9-for-9 on third down pass plays.

I thought Eric Beisel did a great job up the middle, stepping up after Cale Garrett was tossed on the second series for targeting.  Beisel finished with 14 tackles.

Charles Harris finished with two sacks and eight tackles. Solid numbers, but don’t let that fool you.  Both of Harris’ sacks came from up the middle off stunts.  He’s not putting much pressure on the QB at all when he comes off the straight rush on the outside and there were several plays where he put on zero moves to try to get around the blocker.

On the first touchdown by USC’s Deebo Samuel, Harris was contained by the tight end allowing Samuel to get to the outside for an easy touchdown.  I witnessed many plays where Harris appeared to not go all out.

Offensively, the Tigers have improved on the run game from earlier in the season and that is not by mistake since freshman Damarea Crockett took on a bigger role.  The freshman from Little Rock had a 20 yard touchdown run.  Even Ish Witter busted off a 25 yard touchdown run.

The issue with Missouri’s pass game is two-fold.  The team lacks a receivers group that can hang onto the football.  Secondly, I question the play calling on Josh Heupel.  While USC did everything possible to not let their QB fail, Heupel continues to make questionable calls that always seem to back fire and make Drew Lock look bad.

In the middle of the game, Mizzou was having success.  They had scored three touchdowns on four possessions to tie the game at 21-21.  The Tigers were chewing up USC’s defense with their run game and short to intermediate passes.  Midway through the third quarter, on the move again for their fourth drive out of five series, Heupel calls for a streak down the right sideline on 1st and 10 from the Carolina 42 and the pass  is under thrown by Lock and picked off at the two yard line.

There was no need to take shot down the field.  In a span of just over a quarter’s worth of play, Mizzou was picking apart Carolina and Heupel decides to air one out.  Good play call if Mizzou is playing Delaware State…bad call if its against an SEC defense.

Heupel continues to try to show off Drew Lock’s arm.  The problem is that there isn’t a wide receiver who is both fast and/or big enough to win one-on-one battles deep down field in the SEC.

That play killed the drive, killed the momentum and turned the game around.  USC answered with a 98-yard drive and a field goal sandwiched around two missed attempts from Turner Adams (44 yds) Tucker McCann (31 yds) and Mizzou was finished.

If you are one of those fans calling blaming this on Barry Odom, stop.  Odom needs time to recruit his players, coach his players and develop his own program.

That will be difficult for a fan base that is waiting for success.  With the rebuilding of the men’s basketball program and now what looks to be at least a 2-3 year rebuild on football, Tiger fans must show patience.