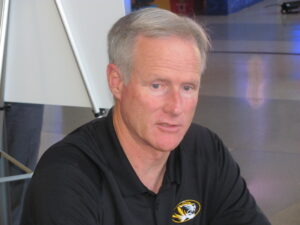 In its final tune-up before officially beginning off the 2016-17 campaign, Mizzou Men’s Basketball utilized a 21-2 run in the second half to put away Central Missouri, 66-59, in an exhibition contest at Mizzou Arena on Friday.

Freshman guard Frankie Hughes (Cleveland, Ohio) led the way for Mizzou in his first collegiate contest, scoring 15 points on 6-of-10 shooting from the field and 3-of-4 marksmanship from beyond the three-point arc. Freshman forward Willie Jackson (Cleveland, Ohio) and sophomore forward Kevin Puryear (Blue Springs, Mo.) each grabbed eight rebounds to lead the Tigers.

Mizzou jumped out to a 13-2 lead in the first half thanks to an 8-0 run immediately following the first media timeout. Jackson helped lead the way during the run, contributing four points and two rebounds while also starting a fast break off a steal that led to a layup for sophomore guard Jordan Geist (Fort Wayne, Ind.). Sophomore guard Terrence Phillips (Orange County, Calif.) paced the Tigers in the first half, scoring six points (2-of-4 FG).

In the second half, freshman forward Reed Nikko (Maple Grove, Minn.) initiated the lopsided 21-2 run with a two-handed slam dunk that energized the Mizzou Arena crowd and helped the Tigers open an 18-point lead. Nikko followed the thunderous two-handed slam with a layup and and-one conversion on the next possession. Geist connected on back-to-back three-pointers during the run as the Tigers took a 53-35 advantage with 9:26 remaining in the half. The Mules attempted a comeback late in the half, but Hughes put an end to the attempt with a one-handed slam dunk on a fast break in the final minute of the game.

Mizzou will open the regular season on Sunday, Nov. 13, when the Tigers host Alabama A&M. Tipoff from Mizzou Arena is scheduled for 7 p.m. (CT) on the SEC Network.

Previous Post: « Billikens’ roll to exhibition victory over Greenville
Next Post: The Bill Pollock Show–I’m picking #Mizzou over Muschump but K-Mac tells me to watch out for USC! (PODCAST) »