Both major candidates running for Missouri lieutenant governor emphasize bipartisanship and their ability to work across the aisle. 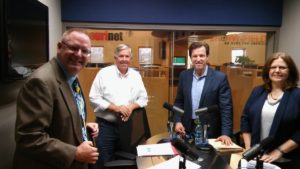 “And I think if you go back to the day, whether it be right-to-farm, whether it be Proposition B, that I actually reached across the aisle, met with every Senator, Democrat and Republican, to explain to them why those issues were so important for the state of Missouri,” Parson says.

“I co-chaired the bipartisan Center Aisle Caucus with my colleague, my Republican colleague Jo Ann Emerson (R-Cape Girardeau). We worked closely together to find common ground on issues across our state. That’s always been my approach,” says Carnahan.

Both Parson and Carnahan say they could work with a governor of the opposite party.

“I’m presenting myself as the best candidate for lieutenant governor, but also one that I think it’s important to be able to work with the governor, regardless of who it is,” Carnahan says.

“If you’re going to be a successful legislator in Missouri, you have to be able to work with a Senate, the House and the governor’s office, that’s just it. You can’t always be just one side or the other. You have to find where the ground is to move the state forward,” Parson says.

Parson served as Polk County Sheriff, before being elected to the Missouri House in 2004. He served three House terms, and is currently in his second term in the Missouri Senate.

Carnahan served as a State Representative from 2001 to January 2005. He was elected to the U.S. Congress in 2004 and served four terms.

Previous Post: « Missouri voters may not be swayed much by renewed Clinton email probe
Next Post: Missourinet 7 a.m. News 11-1-16 »