Missouri voters cast ballots on two separate cigarette tax measures next Tuesday.  Both measures have drawn unlikely supporters and opponents.  Tobacco companies have spent millions to back both, while health organizations are highly critical of them. 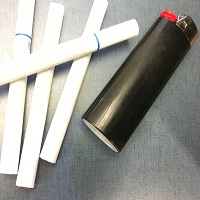 Amendment 3 would add a 60-cent tax on packs of major brand cigarette, and would impose an additional 67-cents on smaller brands.  Its backers claim the additional tax would eliminate a loophole which allowed the smaller companies to avoid payments large companies agreed to make to 46 states, including Missouri, as part of a massive lawsuit settled in 1998.

The parent company of R.J Reynolds is the biggest supporter of Amendment 3, having spent almost $6 million to back it.

Two small brand companies, led by Cheyenne International LLC have spent well over a million dollars on Proposition A, which would hike the cigarette tax by 23-cents.  It’s also getting vocal support from an organization representing convenience stores, which claims big tobacco is trying to snuff out competition though Amendment 3’s extra tax on small brands.

Among the major health organizations opposing both taxes are the American Heart and Lung associations and the American Cancer Society.  Leah Martin with the American Lung Association in Missouri says the cigarette taxes would have to be much bigger to have an impact on smoking levels.

The $300 million raised annually from Amendment 3 would largely go toward early childhood education, while the $100 million generated by Proposition A would be used for highway projects.

Amendment 3 has also come under fire from the state’s teacher’s union, which claims it allows money raised to be used to fund private religious schools.  The American Civil Liberties Union opposes the measure for similar reasons.

It’s not certain what would happen if both measures were to pass.  State law says that if voters approve two or more conflicting statutes, or amendments, at the same election, the statute or amendment receiving the largest affirmative vote will prevail.

But the law does not provide protocol for when a statute and an amendment are in conflict.  Nancy Gonder with the state attorney general’s office says the issue of whether the two ballot propositions are in conflict will likely be addressed by the courts after the election.

Both measures seem to face challenges with voters.  A recent poll by Mason Dixon Polling and Research shows majority opposition both of them.  Proposition A draws 39 percent support while Amendment 3 receives 43 percent backing from voters polled.

Missouri currently has the lowest cigarette tax in the country at 17-cents per pack.  If Amendment 3 passes, three adjacent states – Nebraska, Kentucky and Tennessee would have lower tobacco taxes than Missouri.