(NASCAR)—A tire failure that put Carl Edwards’ car into the Martinsville wall has put his championship hopes in a desperate place.  He’s dead last in this round of eight contenders, 32 points out of fourth place in the standings, where he needs to be to run for the NASCAR title in the last race of the year at Homestead.

Edwards had been running well on the .526 mile track, inside the top ten and confident he would have a contending car at the end of the race when he hit the wall, destroying the right front suspension. 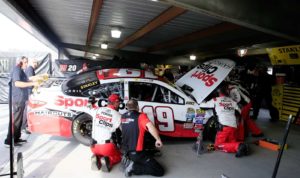 Jimmie Johnson won the race and guarantees himself one of the four spots in the final race as he seeks his NASCAR record-tying seventh championship.  Three of Edwards’ teammates occupy the next three positions in the standings.

The most points a driver can win in a race is 45 and while each race is unpredictable, the reality is that Edwards has little chance of making the final four unless he wins next weekend at Texas or the weekend afterwards at Phoenix.  He has victories at both tracks—three at Texas and two at Phoenix.  He’s had top tens in twelve of the 23 races he’s run at Texas, and in eleven of the two-dozen races at Phoenix.

The NASCAR season has only three races left—Texas, Phoenix, and Miami/Homestead.

(FORMULA 1)—Defending champion Lewis Hamilton has chipped away at the points lead of teammate Nico Rosberg with a win in the Mexican Grand Prix.  Rosberg finished second and still leads Hamilton by 19 points with two races left on the F1 schedule.

F1 goes to Brazil in two weeks.  Rosberg will guarantee the championship with a win there.  Another 1-2 finish with Hamilton ahead will still leave him with a twelve-point lead going into the final race of the year.  Rosberg had nine victories this year, Hamilton eight.  They have finished 1-2 in six races, 1-3 in five others.

(IndyCar)—It’s the off-season for IndyCar, a chance to do some dancing and keeping in shape for 2017 (as if James Hinchcliffe isn’t finding his competition on Dancing with the Stars a physical fitness challenge.  Last Monday night he and partner Shanna Burgess boogy-woogied to the top score of the night: http://www.indycar.com/Videos/2016/10/10-25-DWTS-Hinchcliffe-Week7.

IndyCar drivers say the physical stress of driving one of their cars requires strength and conditioning.  In fact, two of the drivers say IndyCar can require more upper body strength than Formulal 1. Alexander Rossi, this year’s rookie of the year, notes one big difference is that IndyCars do not have power steering. Formula 1 cars do.  Cornering forces are comparable to those in Formulal 1, “if not probably higher,” says Rossi.  He changed his conditioning regiment from 80% cardio and 20% strength to about 60% strength and 40% cardio.

Then there are g-forces.  Max Chilton, who also came to the series from F1, says oval racing is a bigger strength challenge than F1’s road courses. He says strong wrists and forearms are especially important, especially on the shorter ovals.  That’s where the force of gravity also is at its greatest.  The high-banked Iowa Speedway, less than nine-tenths of a mile long, takes about 18 seconds to lap with half of that time the driver dealing with about 6 g’s.

And finally, more video—of how a quadriplegic IndyCar owner is able to drive again. Sam Schmidt has a Nevada driver’s license.  IndyCar has produced this video to show the technology that lets him drive—and gives hope to others dealing with paralysis: