A conservative group has taken a stand against a November ballot initiative to limit campaign contributions in Missouri. 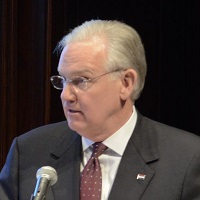 Amendment 2 would limit donations to statewide, legislative, and judicial offices to $2,600 per election and would cap contributions to political parties at $25,000.

Ryan Johnson with Missouri Alliance for Freedom contends the current arrangement, which allows for unlimited donations, is a central pillar of free speech.

He also thinks the law should be left untouched because it requires transparency.  “That gift that you makes to that campaign is 100 percent reportable and 100 percent accessible through the Missouri Ethics Commission and their website” said Johnson.  “Everybody in the world will know where your political money went, and who you made an investment in.”

Democratic Governor Jay Nixon was influential in limiting campaign contributions while serving as the state’s attorney general.  He won a case before the U.S. Supreme Court (Nixon v. Shrink) which reinstated Missouri’s restrictions and cleared the way for campaign finance reform nationally.

He’s highly critical of the current system.  “The system we’re in right now of unlimited secret, dark money coming in out of these races” said Nixon.  “Millions of dollars that nobody knows where it even is from.  And then unlimited amounts for these small races.  $50,000, $100,000 checks. $1 million, $2 million checks.  That just corrodes confidence in democracy.”

Nixon strongly favors the ballot measure before voters, even though some ethics experts think campaign finance reform should be handled through the legislative process rather than as a constitutional amendment. “I’m hopeful that Missourians once again speak loud and clear, and that the politicians listen” said Nixon.  “I’ve been for limits the entire time I’ve been involved.”

Johnson with Missouri Alliance for Freedom contends large contributions don’t lead to outsize influence of those donors.  He notes St. Louis billionaire Rex Sinquefield has made such donations this year with little to show for it.  “He spent somewhere in the neighborhood of $11 million this election cycle.  And most of those results did not turn out the way he desired.”  Johnson also points to a study by the Center for Competitive Politics which showed no relationship between contribution limits and states’ corruption rates.  The Center for Competitive Politics claims its mission is “to promote and defend First Amendment rights to free political speech, assembly, and petition.”

Missouri voters will determine if campaign contributions will be capped in the November 8th general election.