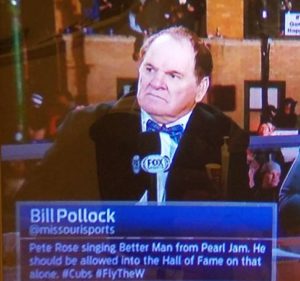 I’m always amazed by stories of people who wake up from a coma speaking a language they’ve never learned.  I’ll tell you about a soccer player who came out speaking Spanish.

Mizzou football coach Barry Odom said he is failing. The Tigers defense got torched for almost 600 yards against a Conference USA team.  I was optimistic the Tigers could get six wins at the beginning of the year, but most likely 5-7.  This past Saturday was one of those five wins I figured on.

What does it mean for Cubs fans to see their team in the World Series?  I try to explain the euphoric feelings.  Something I’m sure Cardinals fans have taken for granted.

Also, thanks to Fox Sports 1 for giving me a shoutout with my tweet after I heard Pete Rose belt out some Eddie Vedder.