(NASCAR)—Columbia driver Carl Edwards and all three of his Joe Gibbs Racing teammates have made it to the semi-final round of eight in NASCAR’s Chase for the Championship.  Denny Hamlin, who had to run strongly to make the round, finished third in the race and tied for eighth in the standings with Austin Dillon.  But Hamlin moved ahead because he has won three races this year while Dillon is still waiting for his first career checkered flat.

Edwards (shown talking to his crew in the garage before the race) had said before the race that he planned to run up front all day, hoping to run ahead of the major crashes that are common at Talladega. 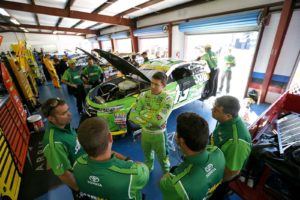 But he and teammates Matt Kenseth and Kyle Busch instead ran most of the race from the back, far enough behind to take proper action if a major wreck occurred ahead of them.  All three started the race in sold enough points positions that just going the distance would be enough to guarantee them spots in the round of eight.  Busch finished 30th, Edwards was 29th, and Kenseth was 28th.  The four Gibbs drivers join Jimmy Johnson, Kevin Harvick, Joey Logano, and Kurt Busch in the next three-race round.  Drivers who win a race automatically will contend for the championship in the season finale at Homestead/Miami Speedway.  Non-winners will make up the four finalists based on points.

Edwards, who is not one of the sport’s biggest social media participants, told reporters before the race that his goal is to tweet from Homestead’s Victory Lane.  But, “By the time I join Twitter, Twitter will be out of fashion, probably,” he said.  In fact, he’s not sure what his Twitter handle would be, or is.

Joplin’s Jamie McMurray, who usually runs strongly in restrictor plate races, was well within the top ten for a good part of the race before being part of a three-car wreck triggered by Kasey Kahne. He finished 19th.

From NASCAR’s longest and fastest track, drivers go to one of its shortest tracks next week. Martinsville Speedway in Virginal is .526 of a mile. It held its first NASCAR touring series race in 1949 and is the oldest track still on the circuit.

(Formula 1)–F1 wasn’t campaigning in some exotic part of the world this weekend, unless you consider Texas exotic.  The United States Grand Prix has gone to Lewis Hamilton for the fourth time in the five times the race has been run at the Circuit of the Americas.  He led the entire race from the pole and at one time was more than ten seconds ahead of teammate and runnerup Nico Rosberg. It’s Hamilton’s fifth USGP win, tying him with Michael Schumacher.

The win, Hamilton’s sixth this year trims Rosberg’s points lead from 33 to 26.  The win is Hamilton’s fiftieth Formula 1 victory.  Only Alain Prost, with 51, and Schumacher with 91 have more.

Three races remain on the schedule including next weekend’s race in Mexico.