(NASCAR)—The unpredictability of racing on the high banks of Talladega Superspeedway adds a lot of stress to drivers who want to make the next cut in The Chase for the championship. Because the track is so fast, NASCAR takes steps to reduce engine power which then puts an emphasis on nose-to-tail drafting and pack racing that usually produces at least one multiple-car crash.  Fans and drivers just call it “the big one.” 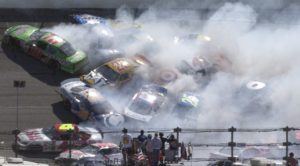 Two drivers, Jimmie Johnson and Kevin Harvick, are guaranteed to move into the round of eight contenders after Talladega because they have won the last two races and victories automatically advance drivers into the next round.  But Talladega’s propensity for big crashes makes uncertainty a fact of life for almost everybody else. The big crash can turn a driver running near the front into an also-ran in a matter of seconds.

Columbia’s Carl Edwards knows about that.  In 2009, he was dueling Brad Keselowski for the win and was leading heading to the stripe when a slight bump at 200 mph sent him out of control and into the air upside down.  His destroyed car stopped short of the finish line and Edwards wound up 24th.

He is in a good position going into the race Sunday.  He’s fourth in points, 24 points ahead of ninth.   Here’s how he can advance: 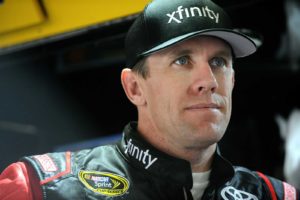 If he finishes 23rd Sunday without leading a lap, he’s in.  If he leads a lap, which gives him a bonus point, he’s in the round of eight if he finishes 25th.  If he leads the most laps in the race, which will give him another bonus point, he needs to finish only 25th.  That’s assuming neither Harvick nor Johnson win the race.  If they do, he has to finish 25th, 26th, or 27th under the scenario we sketched above to make the next round.

He’d automatically advance if he wins, of course, but his best finish at Talladega is third and he’s been outside the top ten in eighteen of the twenty-four races he’s run there.  His average finish is 21.4.