(NASCAR)—Give Carl Edwards a choice of whether he’d rather win at Daytona or win at the Kansas Speedway, he’ll take Kansas.  It’s only 135 miles from his home town of Columbia, the closest track for NASCAR’s top touring series. 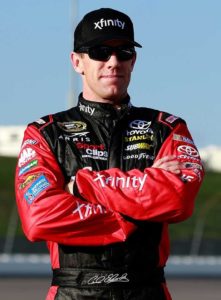 Finishing second isn’t good enough for Edwards—which he did again yesterday, falling behind Kevin Harvick on the last re-start with thirty laps left.  He was able to cut Harvick’s lead to less than 1.2 seconds at the end, matching his best finish at the Speedway. He was second to Jimmie Johnson in one of the 2008 races at Kansas.

Harvick’s win automatically puts him in the field of eight drivers who will compete for the championship after next week’s race at Talladega.  Edwards’ runnerup finish puts him fourth and strengthens his chances to make the round of eight.  He’s 24 points up on Austin Dillon, the first driver outside the top 8.

Joplin’s Jamie McMurray flattened a tire and the right side of his car when it hit the wall early in the race. Although his crew got the car back into running condition and he was still running laps at the end, he was 34 laps down and finished 37th.

Next up is Talladega, the longest and fastest track on the circuit where championship chances can vanish in an instant in the Fall race.  NASCAR restricts the power the cars can generate on the big track, which leads to pack racing and a small mistake or a blown tire can trigger a major crash that wipes out or damages a good chunk of the field, including drivers hoping for a championship.  In the two dozen races Edwards has run at Talladega, he’s finished in the top ten only six times and averages finishing 24th. 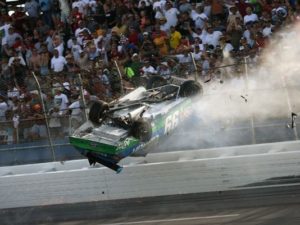 Many fans will recall his 2009 crash when a slight bump from Brad Keselowski a few yards from the finish line and a hit from Ryan Newman sent his car flying into the catch fence.  Edwards climbed out of his destroyed car and ran on foot to the finish line.   But since it’s the car, not the driver, that finishes races, Edwards was awarded only 24th place, one lap behind the winner.

Winners of the three races in this round and the next highest drivers in the points advance to the championship round of eight after Talladega.

(IndyCar)—Seven IndyCar teams have tested at Gateway Motorsports Park, across the Mississippi from St. Louis, as the series prepares to race there in 2017.  Graham Rahal tells Motorsport.com the 1.25-mile track should produce “great racing” and says ‘there’s a heck of a lot of potential.  He expects lap times to top out in the mid 170s.

(Formula One)—Nico Rosberg heads to the Circuit of the Americas in Austin, Texas this week with a 33-point lead in the championship standings over teammate Lewis Hamilton.  The Grand Prix of the United States is the first of the four remaining races.

Previous Post: « #Chiefs get back in the AFC West race after taking down the Raiders
Next Post: Missouri U.S. Senators approach presidential race from two different worlds »