Key portions of a controversial gun law passed by Missouri lawmakers are in effect as of Friday. 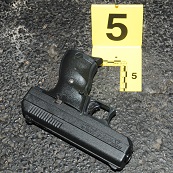 The “concealed carry” measure includes a provision already in place prior to Friday which creates a permit renewal grace period for military personnel serving overseas.

Two controversial features are in effect.  One is the expansion of the“Babysitter Castle Doctrine” which allows people authorized by a legal property resident to be on the property, to use deadly force.  The other, known as “Stand Your Ground”, removes the requirement for a person to retreat before using force if there’s reasonable fear of safety.

Going into effect January 1st is the measure’s signature provision which allows for concealed carry of a firearm without a permit or training.

A few restriction to the law will remain.  A permit will still be required in places such as schools, churches, government buildings, and restaurants and bars.  Those documents, called “Lifetime Permits”, are valid only in Missouri and can be obtained for a period of 10, 25 or 50 years.

The existing five year permit will continue to allow a gun owner to travel into states where such designations are still required.

With the new law, Missouri will join six other state, including neighboring Kansas, which do not require a permit to carry a concealed handgun inside their borders.

Also going into effect on January 1st is a feature which allows municipal and county prosecuting attorneys, as well as municipal, associate or circuit judges to carry a firearm for self-defense with as long as they have a permit.

Also becoming law Friday is a maximum fee limit which prohibits sheriffs from charging more than $100 for a five year concealed carry permit, including background checks.  Another provision allows a portion of concealed carry training to be conducted online while not impacting the classroom or actual shooting competency portion of the course.