(NASCAR)—Columbia driver Carl Edwards avoided the catastrophes that struck five of the twelve driver still in the hunt for the NASCAR championship in the rain-delayed race at Charlotte, and although the final result was not glittering it put him in a solid position with two races left before the next cut-down.

Edwards finished twelfth in the race.  But because of the way scoring is done at this stage of the season, he is sixth in points.  He is twenty points ahead of ninth and tenth-place drivers Austin Dillon and Chase Elliott, who was knocked out of race contention in a wreck. After two more races, the championship field will be whittled to eight. 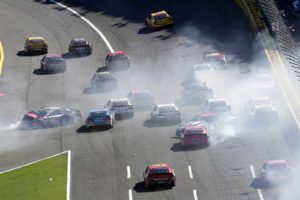 Both Edwards (the yellow car at the top left) and Joplin driver Jamie McMurray (the #1 car behind him) got through the afternoon’s biggest crash without disabling damage to their cars.  McMurray, who fell out of the points standings when he lost an engine last week, finished tenth.

Six-time NASCAR champion Jimmie Johnson ended a 24-race winless streak, the longest of his career, by winning his 78th career race, seventh on the all-time list.  The victory automatically gives Johnson one of the positions in the round of eight.  Johnson hopes to join Richard Petty and Dale Earnhardt, Sr., as a seven-time NASCAR champion.

Point totals for the top twelve drivers after next weekend’s race at Kansas Speedway and at Talladega the week after will determine whether Edwards is one of the seven other drivers to join Johnson in the next round.

(IndyCar)—Chip Ganassi Racing will use Honda power in its four Indy cars next year, moving away from Chevrolet.   The shift means Ganassi—at this point—is doing business with three manufacturers in the three major racing series in which he fields cars.  He uses Chevrolets in NASCAR, a series where Honda does not participate.  And he works with Ford in its sports car races with the new Ford GT.

Last year Honda and Chevrolet each had eleven cars in the regular IndyCar grid.  Speculation is that the Ganassi shift to Honda means the two car teams of A. J. Foyt and Dale Coyne will leave Honda and go to Chevrolet.

Where two-time Indianapolis 500 winner Juan Pablo Montoya lands for 2017 is still up in the air after the announcement that his contract with Penske has not been renews and he has been replaced with Josef Newgarden.  Newgarden moves over from Ed Carpenter Racing. It’s thought Montoya might wind up with ECR.  Newgarden was fourth in the standings this year behind Penske drivers Simon Pagenaud, Will Power, and Helio Castroneves.

This year’s Indianapolis 500 Champion, Alexander Rossi says he has three obligations as a reserve driver for the Manor Racing Team in Formula One and after that he’s all IndyCar.  He’ll continue with the team jointly owned by Bryan Herta and Michael Andretti, who fielded his winning car in the 500.

(Formula 1)—Mercedes driver Nico Rosberg ups his points lead over teammate Lewis Hamilton to 33 points by winning the Japan Grand Prix.  Hamilton started alongside Rosberg on the front row but fluffed the start was eighth going into the first turn. He fought back and challenged Max Verstappen late but couldn’t get past him.  Hamilton filed a protest accusing Verstappen of erratic driving but the protest later was withdraw.

American Gene Haas, whose team is headed into the final races of its first Formula 1 season, had its best starting positions of the year for the Japan Grand Prix.  Prime driver Romain Grosjean started eighth and number two driver Estaban Gutierrez rolled off tenth, the first time this year both Haas drivers have started in the top ten.

Talk in the paddock is that Haas might not have Gutierrez back for 2017.  He has yet to score a point this year and his driving has drawn criticism from some competitors.  All 28 of the Haas team points have been racked up by Grosjean.  But a team spokesman says no decisions will be made until the season is over.