You are here: Home / Sports / Markus Golden shines on national TV at the expense of Gabbert — #Mizzou 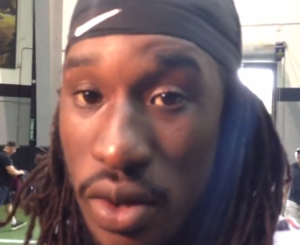 Markus Golden is paving the way to stardom in the NFL.

The rest of the nation, or at least those who decided to sit through that painful display of what they call pro football on Thursday, got a chance to see what Mizzou fans have known for a long time…Markus Golden can flat out play.  In an otherwise pretty dismal display of football played by two NFL teams with no skill at the quarterback position, Golden and the Arizona defense took advantage of Blaine Gabbert and the 49ers by sacking the former Mizzou QB seven times in a 33-21 win.

Golden was responsible for two of the sacks and he finished with ten tackles, including seven tackles for loss.

“He’s light years ahead, because he understands what he’s doing,” said Arizona head coach Bruce Arians said. “He’s gotten better and there are better guys around him. He’s been a force since he’s been here.”

Golden has immediately made an impact on the Cardinals defense and he now leads the NFL in sacks.  I always knew Golden to be a humble guy and he knows there are several great pieces around him.  So when he was told he leads the league in that category, he quickly deflected the attention.

“That’s cool, man, but I’m all about winning,” he said. “My mom’s probably happy. My little cousins are happy.”

Golden is always thinking about his family back home in St. Louis and was happy to be able to put on a show for them.

“My grandma doesn’t have cable,” Golden said. “She likes her regular TV. So she was able to watch this game tonight, and I can just see her now, smiling and being happy. My whole family’s happy. The kids got to stay up extra tonight to watch the game, so it felt good to represent for them.”

As for Gabbert…he finished 18 of 31 for 162 yards, with one touchdown and two picks.  He also ran for his life seven times for 70 yards.  After starting the season with five touchdowns and six interceptions and leading SF to a 1-3 record, don’t be surprised to see Colin Kaepernick back in the starting lineup.