(NASCAR)—Joplin’s Jamie McMurray has failed for the second straight year to advance to the second round of NASCAR’s Chase for the Championship, knocked out this time when his engine failed 192 laps into the 400-lap race at Dover. 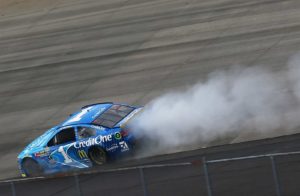 McMurray was trying to be one of twelve drivers to make the second round of the run-off for the championship. He finished 40th, last, in the race.  Teammate Kyle Larson had electrical problems early in the race and could never recover. He, too, fails to advance to the field of twelve.

Columbia driver Carl Edwards does advance, however.  He finished fourteenth at Dover and will go on to the next three-race round as the tenth seed.  The championship field will be cut to eight contenders after three more races.

Martin Truex won the race, his second victory in the first three-race round and his fourth victory of the year.

The series returns to Charlotte Motor Speedway next week to start the next round.  It’s one of Edwards’ top tracks. He has eight top tens in the last ten races there including a victory in the 600-mile race in May, 2015.  But he hasn’t won a race since his back-to-back victories in April.

(IndyCar)—Pieces are starting to fall into place for the 2017 IndyCar season—with a major change possible for 2019.

Andretti Autosport will continue its partnership with Bryan Herta Autosport through the next season.  BHA fielded the 2011 Indianapolis 500 winning car of Dan Wheldon and had this year’s 500 winner, Alexander Rossi, who was coached by Herta through lap after lap of a fuel-saving strategy that brought him victory in his first 500.

Some media reports last week said Rossi had re-signed with Herta but Andretti says no such deal has been made—although an announcement could come during a teleconference today (Monday). Rossi had been a backup driver for a Formula 1 team last year but didn’t run any Grand Prix races. He says his win at Indianapolis has “opened many doors” but he has shown a leaning to staying with IndyCar.

Josef Newgarden and Ed Carpenter Racing have announced a parting of the ways.  Newgarden is believed to be headed to Penske, replacing Juan Pablo Montoya, whose contract is up.  Montoya says he knows he will have a ride in ’17 but is not saying where, although some speculation has him swapping seats with Newgarden at ECR.

IndyCar Director of Competition Jay Frye, a former football player at the University of Missouri, says Indycar could be changing its engine specs in three or four years.  The series has been looking for a third engine manufacturer to join Honda and Chevrolet.  It has used 2.2-liter V6, twin-turbo engines since 2012. Frye tells Motorsport.com the first opportunity for the change would be 2019 or 2020.

And here’s a feel-good story from IndyCar.  Team owner Sam Schmidt, a paraplegic since a racing crash in 2000, has been given the nation’s first restricted license to drive a semi-autonomous car by the governor of Nevada.  He’ll be driving a specially-modified 2014 Corvette Z06 that has been modified by Arrow, one of his IndyCar sponsors, so that is uses voice commands to change gears, uses breath manipulation to accelerate and to brake, and head movements to steer.

Schmidt turned a lap at the Indianapolis Speedway in May at 152 mph in a semi-autonomous car.  He’s a resident of Nevada, which is letting six companies test autonomous vehicles on its roads.

Defending F1 champion Lewis Hamilton had a twenty-second lead when his engine cratered with fifteen laps left.  The latest engine failure for Hamilton leaves him 23 points behind Rosberg in the championship standings, putting Rosberg in position to win his first title.

Hamilton’s failure to finish meant the Malaysian Grand Prix is only the second race in six years that a former World Champion has not been on the podium at the end. This is the first time four drivers have posted Grand Prix wins since F1 switched from V-8 power to the present turbo-hybrid powerplants.