You are here: Home / Sports / The Bill Pollock Show–Aledmys Diaz and others pull off amazing feats in honor of Fernandez, plus Tom Hanks is lonely (PODCAST) 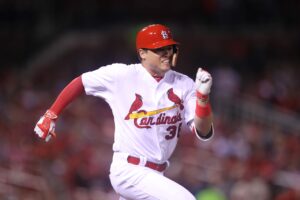 St. Louis Cardinals Aledmys Diaz runs to first base as he grounds out to third base in the sixth inning against the Cincinnati Reds at Busch Stadium in St. Louis on September 27, 2016. Photo by Bill Greenblatt/UPI

Miami leadoff hitter Dee Gordon said he’d never hit a baseball that far in his life when he homered in the Marlins first at-bat in their first game since the death of their ace pitcher Jose Fernandez.  Then on Tuesday night, Cardinals rookie Aledyms Diaz hit his first grand slam and now plans to honor his boyhood friend everyday he walks into a big league clubhouse.  Other Miami players said they tried to talk Fernandez into not going onto the boat.

I take some phone calls…I get corrected when I misspoke on the Presidential debate and a Mizzou homer actually has some great thoughts on how the Tiger football team can improve.

Plus, I think Tom Hanks is lonely.  His marriage is in trouble and I think he needs some new friends.  I come to this conclusion all from a jog through Central Park.  It’s our weekly look at Hollywood gossip!