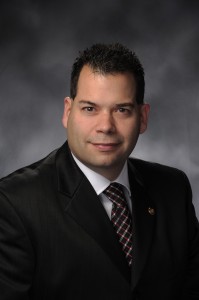 “There still seems to be a lot of interest (in his proposal), a lot of people support it. I think people are tired of the switch, it doesn’t serve a purpose in today’s society,” Kelley says.

Kelley has filed similar legislation three previous times. Under Kelley’s proposal, if voters approve the plan, Missourians would no longer change clocks in the fall and spring.

“You know, the country is in four different time zones. And our companies don’t just deal with people in Missouri. So obviously, they’re already used to dealing with different time zones and things and once people get used to it it’s just the new standard,” Kelley says.

Opponents worry about the potential impact on businesses near the state’s borders, if operating on a different time. During a February hearing at the Statehouse in Jefferson City, State Rep. Tracy McCreery (D-Olivette) said that the “vast majority of Missourians live along the border.”

Kelley is seeking his fourth and final term in the Missouri House in November’s general election. He faces an independent challenger. He represents Barton, Cedar, Dade and Jasper counties in the House.