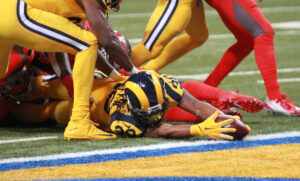 The Rams are gone. Time to move on. File Photo by Bill Greenblatt/UPI

As my buddy was driving us home from the Cubs-Cardinals game last night, we were listening to the Rams-49ers game on satellite and I was reading the tweets of fans and even St. Louis media just bashing the Rams.

I get it, the core of the city was punched in the gut when the NFL pulled out for the second time.  My mom used to say if someone doesn’t have something nice to say about you, it just means they feel bad about themselves.  That’s St. Louis.  I know the breakup was bitter, but you’re acting like jilted lovers and it’s time to stop it and move on.

The very franchise you were fighting to keep (really half-hearted effort to keep), you’re now bashing.  The rest of us of tired of hearing you complain.