You are here: Home / News / #Mizzou gets $10 million gift to upgrade football facilities 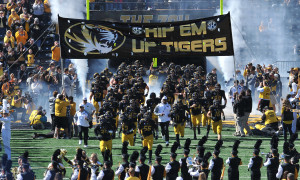 The Mizzou Tigers take the field for a game at Faurot Field in Columbia, Missouri. UPI/Bill Greeblatt

The University of Missouri Athletic Department announced that it has received a $10 million gift from the Kansas City Sports Trust.  The Trust has given the gift toward the building of football facilities, which are currently being developed in the master planning process by Athletics and campus facilities.

“We are so pleased to make this announcement today,” said Director of Athletics Jim Sterk.  “The Kansas City Sports Trust has stepped up with a tremendous leadership gift that demonstrates true philanthropic giving.  We’re so appreciative of this support, and we’re hopeful that this will encourage others to join in and help us achieve our goals of building football facilities that put us in the upper echelon of the Southeastern Conference.  Making this facility become a reality is critical to our commitment in providing one of the best student-athlete experiences in the country,” Sterk said.

Sterk said the gift is an important starting point to kick off a fundraising campaign for the football facility project.  Specific details and scope of the campaign and the project will be announced at a later date after plans are approved and finalized.

“The Kansas City Sports Trust has such a generous history of giving to Mizzou, and we’re very grateful for their continued commitment,” said Head Football Coach Barry Odom.  “We’ve said from the start that we can’t do this alone – we need support from our fans to get where we want to be, and this is an amazing statement of support.  I’m excited to get to work with our administration and our architects to develop plans that will showcase Mizzou in a first-class manner,” Odom said.

The Tigers host Eastern Michigan for their home opener this Saturday at 6:30 p.m.