You are here: Home / Sports / The Bill Pollock Show–Not a fan of the #Mizzou hurry up offense…the best and worst of week one in #CFB (PODCAST) 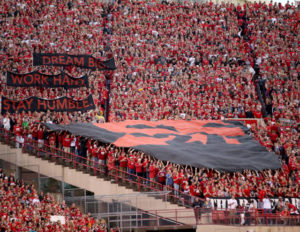 I know they were bitter rivals, but Nebraska deserves praise for the way they honored their one-time punter. (Photo Courtesy Nate Olsen/Nebraska Communications)

I know most of you in Missouri could care less about Nebraska football and that’s understandable.  Most years the Cornhuskers kicked around the Tigers like a stuffed animal.  However, the way they honored punter Sam Foltz who was killed in a car wreck in July was touching.  It was the best story in week one of the college football season.

The day ended horribly for the parents and family.  After leaving the game and arriving home at 3 a.m. on Sunday, they found their house had been broken into by a scumbag (or scumbags) who preyed on the family while they were gone honoring their son.

I went 4-0 on my first week of college predictions.

I also predicted a loss for the Missouri Tigers and I explain why this offense reminded me of the Chase Daniel era–but that’s not a good thing.

My family just returned home from taking our son to college.  Our minivan is dead and I got a speeding ticket, but…it was a great weekend because I had my little doggie with me.  Listen to my podcast (11:30)