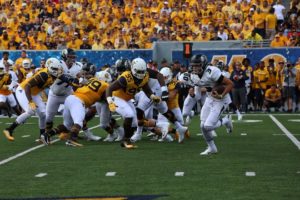 Mizzou Football dropped its 2016 season opener at West Virginia, 26-11, on Saturday afternoon at Milan Puskar Stadium, snapping a streak of 14 consecutive season-opening wins. It was just Mizzou’s second road opener since 1990. West Virginia totaled 494 yards of total offense on the day, but the Tigers had 462 of their own. Senior LB Michael Scherer (St. Louis, Mo.) led Mizzou’s defense with 10 tackles, including one tackle for loss while WR J’Mon Moore (Missouri City, Texas) led Mizzou’s offense with eight catches for 104 yards, both career highs.

West Virginia’s Mike Molina connected on four field goals and the Mountaineers put out 241 yards on the ground to keep the ball away from Mizzou’s offense. Mizzou struggled on the ground, totaling 180 yards on 47 carries, averaging just 3.8 yards per tote.

West Virginia went 60 yards over 11 plays and capped the drive with a 19-yard field goal from K Mike Molina to take a 3-0 lead at the 5:41 mark of the first quarter. Scherer made a tremendous stop on third-and-goal to keep West Virginia out of the endzone, blowing up a QB option read keeper. Scherer tallied four of Mizzou’s first 14 tackles, including two inside the redzone on that drive.

The Mountaineers added another touchdown late in the quarter as a key pass interference penalty on a third-and-long play kept WVU’s drive alive. TB Rushel Shell then broke off a 23-yard scamper on a delayed handoff and took it to the house to extend the lead to 10-0.

West Virginia tacked on a field goal as a Damarea Crockett (Little Rock, Ark.) fumble led to a three-point strike by the Mountaineers. The Crockett fumble came after Mizzou had moved the ball deep into WVU territory. Mizzou countered with another long drive, set up by a career-long catch of 42 yards by J’Mon Moore (Missouri City, Texas). That led to Tucker McCann’s (O’Fallon, Ill.) first career field goal, a 24-yard strike.

Mizzou’s defense stalled West Virginia on its next possession and Mizzou seemed to have something going until the drive stalled in shallow West Virginia territory. On the Mountaineers’ ensuring possession, Mizzou forced a fumble which was recovered on the WVU seven-yard line by DE Marcell Frazier (Portland, Ore.). But Mizzou couldn’t capitalize, running three plays for no gain before McCann missed a field goal. That left the score 13-3 going into halftime.

Out of the break, West Virginia went 70 yards in 2:26 for its second touchdown of the day, extending the advantage to 20-3, capped by a one-yard TD plunge by RB Justin Crawford. Mizzou’s offense continued to sputter in the second half. Molina added two more field goals to put the game away.

Mizzou made things interesting in the final minutes. The Tigers scored their lone touchdown of the game with 1:49 left to play when Lock found Chris Black (Jacksonville, Fla.) on an eight-yard swing pass. Lock then connected with Moore for the two-point conversion. Then Turner Adams (Springfield, Mo.) recovered his own onside kick, and the Tigers needed just four plays to have first-and-goal. But the drive stalled, and the Mountaineers were able to run out the clock.

Mizzou will be back home next weekend as it hosts Eastern Michigan in its home opener on Sept. 10 at 6:30 p.m. For all the latest on Mizzou Football, stay tuned to MUTigers.com and follow the team on Twitter @MizzouFootball and like the team on Facebook and Instagram (Mizzou Football).