You are here: Home / Sports / Can the Cardinals just finish the season on the road? 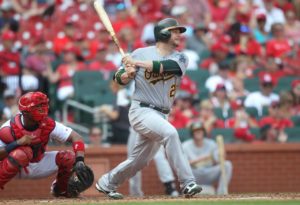 Stephen Vogt’s three-run homer for the A’s helped them grab the rubber game of the weekend series with a 7-4 win over the Cardinals at Busch Stadium.

The loss dropped the Cards to 30-and-37 at home and their lead to just a half game over the surging Pirates in the NL Wild Card.

Jaime Garcia allowed five runs in his 10th loss for the Cardinals.  Matt Carpenter homered and went 3-for-4.

As much as the Cardinals have struggled at home, they’ve played well on the road and kick off an NL Central road trip on Monday night that starts in Milwaukee, followed by Cincinnat and then Pittsburgh.