You are here: Home / Education / Veteran State Senator looks ahead to his final Veto Session

A veteran State Senator believes the Missouri Legislature will try to override about half of Governor Jay Nixon’s (D) vetoes. 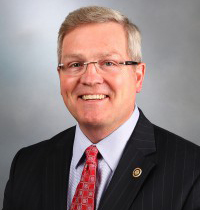 Nixon vetoed 22 bills after the 2016 Session ended. While the GOP holds veto-proof majorities in both chambers, State Sen. David Pearce (R-Warrensburg) says his “hunch” is that lawmakers will attempt to override about half of them.

“You would think that all bills would be brought up for an override. But sometimes they agree with the Governor, other times it is maybe a very, very small, inconsequential bill not worthy of bringing it up during an override,” Pearce says.

Pearce says another potential scenario would be if things have changed, since a bill passed. Pearce says bill sponsors are currently talking to their Missouri House and Senate colleagues, before determining if they’ll seek an override.

“If you have a certain bill, a House bill or a Senate bill, that has been vetoed, it’s kind of your work to see first of all do I have the votes to bring it up for a possible override? Is there interest, is there desire on behalf of my colleagues to do that? And so, that is what’s going on right now,” Pearce says.

Pearce also says the Missouri Legislature will probably try to override Governor Nixon’s withholds for funding for the brain injury program and for mental health. While Nixon withheld 131 items totaling $115.5 million, Pearce does not expect override attempts of most of them.

“When we’re looking at something like that, we want to look at something that would have statewide implications,” Pearce says. “A number of these things are somewhat regional or maybe tied to just one particular college or university.”

Nixon announced the withholdings in July, saying spending restrictions were necessary because of less-than-projected revenue growth for the fiscal year that ended in June. Nixon noted that net corporate income taxes decreased by 35 percent, compared to the previous year.

Pearce is in his 14th and final year in the Legislature, because of term limits.