(NASCAR)—-Joplin’s Jamie McMurray eighty-place finish at Bristol has given him some breathing room as he competes for a chance to run for the NASCAR Championship.  McMurray has increased his points cushion to 42 points, and has advanced to 14th position in the tentative 16-driver field. 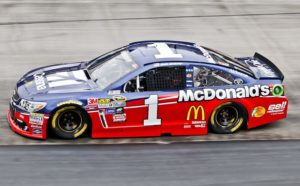 It’s his second straight eighth-place finish. He now has racked up four top tens in the last six races.

He’s one of four non-winning drivers this year trying to make the ten-race runoff on points.  The fight for drivers qualifying on points intensified with Chris Buescher’s best-ever Cup finish of fifth, putting him inside the top 30 in points.  Buescher is one of twelve drivers with at least one win this year.  NASCAR rules say drivers lock in a Chase position if they have at least one win and are in the top thirty in points.

Columbia driver Carl Edwards, seeking to become the first driver to win both Bristol races in a single season since teammate Kyle Busch did it in 2009, started from the pole—as he did in the Spring race—dropped back on the first lap, rallied to lead near the middle of the race, but finished sixth.  Busch led more than half of the laps before crashing on the 357th of 500 laps and finishing 39th.

Rain forced the race to be run yesterday afternoon instead of on Saturday night.  The start of the race Saturday night was delayed for an hour by rain then the race was red-flagged by a short storm and stopped for the night when a heavy downpour struck.  The start was delayed Sunday for more than three hours by more rain, then stopped temporarily with 66 laps to go by another shower.  The race finally ended about 6:30 (CDT) last night.

NASCAR hopes for better luck next Sunday at Michigan International Speedway, one of three races left before the 16-driver field is set for The Chase.

(INDYCAR)—Rain washed out a historic IndyCar 500-mile race at Pocono, in Pennsylvania.  It will be run this afternoon.  When it is run, Mikhail Aleshin will become the first Russian driver to start from the pole in the history of IndyCar racing.  He led all qualifiers with a lap of 220.445 on the 2.5-mile triangular course.

(FORMULA 1)—Formula One drivers return after their summer break next weekend for the Grand Prix of Belgium at Spa-Francorchamps.