(NASCAR)—Columbia’s Carl Edwards is getting ready for what he calls “500 laps of insanity” this weekend at one of NASCAR’s oldest tracks—Bristol.   He and the rest of the Cup drivers are coming from a week off and heading into the last four races before the field is set for the Chase for the championship.  But he and Missouri’s other Cup driver, Jamie McMurray, are facing big differences as they approach the race.

“There’s no better place to come back to than Bristol to get back in the swing of racing,” he says. 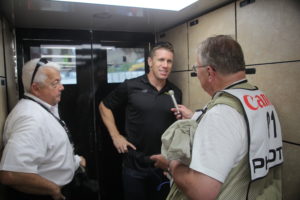 The race is Saturday night.

Edwards won the Spring race, starting from the pole and leading 276 of the 500 laps around the .533 mile track, which held its first NASCAR race in 1960.  He’d like to join Jeff Gordon and Kurt and Kyle Busch as the only active drivers with five wins there.

If he wins Sunday he’ll be the 13th driver to sweep both races in the same year.  Among the other twelve is Rusty Wallace of St. Louis, who did it in 2000.  In fact, Bristol was the scene of Wallace’s first Cup victory thirty years ago.

Edwards, with two wins this year, locked in his place in the Chase early but he told us at the Brickyard 400 the early lock-in hasn’t changed the way he runs races.

The pressure remains on Joplin’s Jamie McMurray going into the four-race stretch as he looks for his second straight Chase appearance. Edwards and ten other drivers have wins and are in the top thirty in overall points, the standard for being in the 16-driver field.  Chris Buescher also has a victory and is considered likely to make it into the top thirty—he’s only three points out with four races to go.  Going into Bristol, McMurray is 38 points to the good, fifteenth in the standings.  Teammate Kyle Larson is behind him, eight points ahead of the 17th place driver, Trevor Bayne.  If Bayne finishes well enough at Bristol this weekend to climb into the top thirty, McMurray will become the driver on t 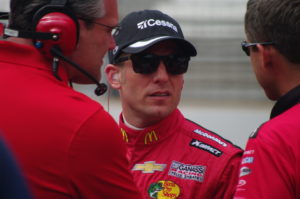 he bubble with three races to go.

But wild cards could have an impact on McMurray’s fate.  Kasey Kahne, who has won a race at Bristol, has not won a race this year and trails him in points.  Kahne, Ryan Newman, and Greg Biffle also have not won a race this year but they have won previously at Michigan, the next stop. Newman is a couple of positions ahead of McMurray in points.  Biffle and Regan Smith have won races at Darlington, and Kahne, Newman, and sometime Missourian Clint Bowyer have won races at Richmond, the last stop before the Chase begins.  A victory by any of them at any of those tracks, and Buescher’s ascendancy into the top 30 in standings, could leave McMurray on the outside looking in.

Dale Earnhardt Jr., also has previous wins at Bristol, Michigan, and Richmond.  But he continues to be on the sidelines recovering from concussion symptoms.

McMurray has had only two top tens in the last eight Bristol races and has finished 13, 11,14 in the last three.  He’s finished in the top ten in only one-third of the 27 races at Bristol in his career with a top of third, twice.

Mike Wallace, the middle brother of the three Wallace brothers, continues to recover from an attack by three men after a concert in Charlotte, NC in late June.  The three men arrested afterwards have been hit with additional misdemeanor charges to go with felony charges filed against them earlier.

Police say the three men attacked Wallace after an exchange of words in the parking lot, knocked him down and continued kicking and beating him.  Wallace’s daughter, Lindsay Wallace Van Wingerden, kneeled over her father to protect him but suffered a black eye and a broken wrist.  Her husband suffered minor injuries.

You can unsubscribe
BP

Previous Post: « Two fugitives wanted by Mid-Missouri authorities
Next Post: Republicans plan sweep of statewide offices. But are they unified? »