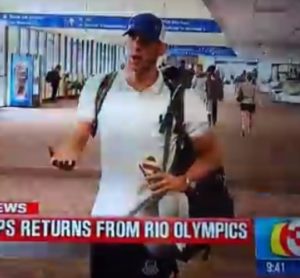 Michael Phelps handles himself pretty well after he encounters an annoying reporter.

The Rio Olympics are turning into a real mess for our swimmers…actually more so for their country…Brazil.  The Brazilian government has taken the passports of a couple of swimmers so they can get to the bottom of alleged armed robbery that took place involving Ryan Lochte, Jack Conger, Gunnar Bentz and Jimmy Feigen after a party following the swimming competitions.

The Brazilian government comes off looking bad, creating an even bigger P.R. fiasco.

Michael Phelps turned in a performance that is worth of a gold medal after he shut down a live TV interview at the Phoenix Sky Harbor.  Phelps tells a local reporter from Good Morning Arizona that he just wants to get his family home safely.  Of course, the reaction of the reporter and the two anchors back in the studio are priceless…and ABSOLUTELY POMPOUS!

Plus I talk some baseball and I have a demand for my family doctor.  I’ll let you know how that turns out.