A Democratic state lawmaker from Columbia claims Republicans are penalizing the University of Missouri for student protests. 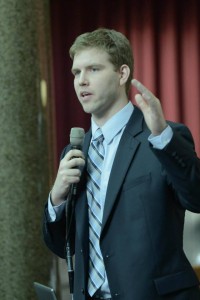 Representative Stephen Webber thinks the mostly GOP legislature unfairly withheld funding for the school after campus protests over racial injustice.  “I think they did punish the university” said Webber.  “They cut $8 million specifically out of the University of Missouri system, the Republican super-majority did, in order to punish the university.  I think that’s wrong.  I think that’s hurting students.  I think it’s hurting hard working staff and faculty members.  And it’s not moving Missouri forward.”

Webber, who’s running to replace term-limited Democratic state Senator Kurt Schafer of Columbia, is making education, including at MU, his number one issue in the election.  “I support properly funding it, fully funding it, investing in it, and keeping the legislature away from playing political games with it.”

Republican David Pearce, who chairs the Senate Education Committee, says the actual $3.7 million administrative cut was appropriate after the demonstrations drew national attention.  “I was in Washington D.C. when this was going on at a national conference.  People from all over the country were coming up to me and saying ‘What’s going on?’.  It was embarrassing.  It was unprecedented.  It’s just something that we got to make sure just doesn’t happen again.”

Pearce thinks the protests along with the school’s football team threatening not to play, created the image students were running the university.  He says the funding cut was a response to a lack of leadership on campus.

The state funded Missouri university system received an overall 4 percent increase from the legislature this year. The administrative cut remains in place however.

Demonstrations by students and faculty erupted over complaints the school administration was allegedly mishandling racism and anti-Semitism on campus.

Missourinet spoke with Webber, Pearce and Chancellor Foley Thursday at the Missouri State Fair in Sedalia.