You are here: Home / Sports / The Bill Pollock Show–Move over Fosbury Flop…I present to you the “Hiroki Pokey” (PODCAST) 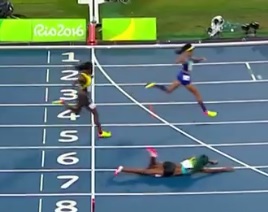 Not the way to win a race (NBC Sports screen shot)

I’ve made some general observations after watching a week and a half of the Olympics.

For starters…I think these high def cameras that are taking us closer to the action are both a good thing and a not so good thing.  Not so good after seeing Japanese pole vaulter Hiroki Ogita miss an attempt because “not so little” Hiroki got in the way.

Our women were knocked out contention in Beach Volleyball by a pair from Brazilians.  We need to take a page out of their book…not on their playing style, but their names.  Yeah, their names…all the great Brazilian athletes go by one name.  The USA lost to Agatha and Barbra…but we won with names.  Our one volleyballer has three names by herself.  She outscored both Brazilians 3-2 in the Name Game.

One of best runners Allyson Felix, got screwed…plain and simple.  I have a new rule for track and field.


We have the Fosbury Flop in the high jump.  I’m going to call this the Hiroki Pokey! 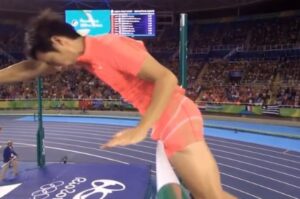