You are here: Home / Sports / #Mizzou will be without top wide receiver for early part of the season 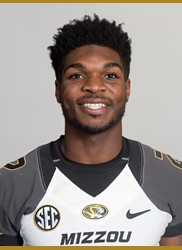 Brown, a 6’3 junior, was as one of Mizzou’s top pass-catching threats in his first full year as a starter in 2015 … Hauled in a team-high four touchdowns and finished second on the team in total catches (27) and receiving yards (326), averaging 12.07 yards per catch.

Brown was injured at Monday’s practice and was held out Tuesday for precautionary reasons.