(NASCAR)—Chris Buescher’s first Cup win at foggy and rainy Pocono Speedway has pushed Joplin’s Jamie McMurray to the verge of falling out of the list of drivers who will compete for the series championship.

The Pennsylvania 400, delayed because of rain on Sunday, ended today (Monday) 22 laps short of the full distance when dense fog rolled in, obscuring most of the track and raising safety concerns by team spotters and NASCAR officials.  Before the fog could lift, heavy rain moved into the area and the race was called and hour after it was red-flagged and drivers parked their cars in pit lane. 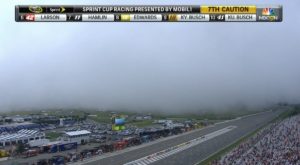 Columbia’s Carl Edwards was running eighth at the time and hoping to race could be resumed. He said his car was better than an eighth-place car.

McMurray had an up-and-down day and was running twentieth when the race was called.  NASCAR rules for the ten-race elimination tournament for the championship say drivers that have at least one victory and are within the top thirty in points are eligible for the Chase.  Buescher stands 31st in the points after his victory but is only six points behind 30th.  Tony Stewart, 27th in points, has a victory and is one of eleven drivers with locked-in positions in the Chase as long as he holds that position or improves it.

If Buescher climbs to thirtieth or better in the points, only four slots would remain for non-winners in the Chase for the championship.  At this point, McMurray is in the fourth non-winner slot, only nine points ahead of teammate Kyle Larson.   Five races remain before the field for The Chase is set.

Buescher’s win is the 19th victory for crew chief Bob Osborne.  The other eighteen wins came when Osborne was Edwards’ crew chief before he stepped away in 2012 because of health reasons.  He returned as a crew chief last year but Edwards had left Roush-Fenway Racing for Joe Gibbs Racing.  After finishing the year with RFR, Osborn moved on to Front Row Racing, a one-car team with only one Cup win in its history.

NASCAR moves to the road course at Watkins Glen, New York next week.  The course has been a challenge for McMurray, who has only two top tens in 13 races there.