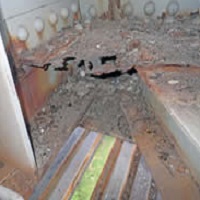 The plan to repaint the westbound span is being delayed because crews are finding structural problems which have to be addressed.  In the process of blasting away the old paint, its being discovered rust has had a greater impact on the steel than originally expected.

David Sylvester with MoDOT contends it’s impossible to know what damage has occurred until the original paint’s been removed.

“Our folk are actually learning as we’re going through this” said Sylvester.  “(They’re saying) ’OK, we saw something like that a little while ago, and we took it off and it looked pretty bad.  This is probably going to be another one of those also’.  So as we’re going through, our folks are actually learning and seeing what might be under there and trying to anticipate”.  Sylvester says the additional knowledge is helping crews as they make repairs to the bridge.

MoDOT has decided to do the extra work now as a preventative measure.  Officials contend it’s better to get it done while the bridge is being repainted, rather than waiting 10-15 more years when the structure could need to be completely rebuilt.

Sylvester says a total rebuild would cost the state $100 million.  The current project is estimated to run $500,000 over the original budget of $7 million.

The three-lane westbound structure was built in 1955, while the newer westbound bridge was constructed in the late 1980’s, opening in 1990.

Extra money was required to duplicate the original “signature” truss bridge.  MoDOT officials says the additional expense probably would be prohibitively high today, and duplication of the original bridge would be scrapped if it were to be built from scratch today.

Sylvester estimates the westbound side, which was initially targeted to reopen at the end of August will now be delayed until mid-October.

The structure carries 28,000 vehicles a day.  That traffic is now being crammed into fewer lanes on the eastbound bridge.

(photos courtesy of the Missouri Department of Transportation)