(NASCAR)—Columbia driver Carl Edwards spent most of his day chasing teammate Kyle Busch, the only driver to qualify faster than he did for the Brickyard 400 at the historic Indianapolis Motor Speedway, 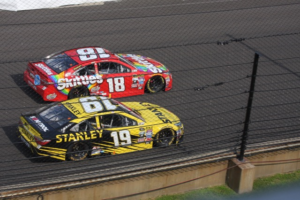 drawing to within less than a second of Busch before his troubles on restarts turned into a disaster with six laps left in the scheduled 160-lap race..

Edwards, who started outside Busch on the front row, re-started in that position after several caution periods and had trouble each time.   On his final restart, Edwards went high into turn one and hit the wall in turn two, starting a crash that damaged several other cars.  He was able to get his damaged car back to the pit lane. 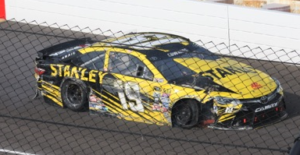 But his crew decided it was too badly damaged to continue.  Edwards finished 35th in the 40-car field.

Edwards crash was the first of three that led to four re-starts.  Joplin’s Jamie McMurray triggered the second yellow flag when he tried to drop to the inside line on a re-start and couldn’t clear Tony Stewart’s car.  Stewart clipped McMurray’s car, sending it spinning into the infield then back onto the track where it hit Ryan Newman’s car. Two other cars were damaged. 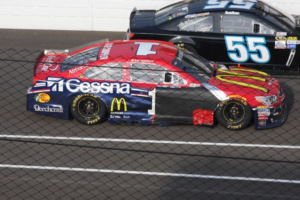 McMurray’s crew patched his car with black tape and he was able to finish as the last car on the leader’s lap, but the crash ended his bid for a third straight top-ten finish.  He wound up 19th.  The crash, however, did not endanger his pursuit of a chance to win the NASCAR championship.  He’s 15th in the Chase standings, 24 points ahead of the last driver in the running for the final 10-race run for the championship, teammate Kyle Larson, and 34 up on Kasey Kahne, the closest threat to knocking Larson out of the running.

Late crashes and re-starts extended the race to 170 laps.  Winner Kyle Busch led 149 of those laps. Only two other drivers led—Brad Keselowski and Joey Logano, both after Busch had pitted for fuel and tires.

Edwards, McMurray, and the rest of the NASCAR tour moves to Pocono next Sunday.

(FORMULA 1)—Nico Rosberg’s points lead built with four wins in the season’s first four races and a fifth victory later disappeared with Lewis Hamilton’s win in the Hungarian Grand Prix.  Rosberg finished second to Hamilton, who started from the pole and led every lap to match Rosberg’s win total.

Rosberg entered the race with a one-point lead but left Hungary down by six.

Formula One’s next event is the grand Prix of Germany at Hockenheim next Sunday.

(INDYCAR)—Indycar had the weekend off after its Toronto race. The series returns to the track next week at Mid-Ohio.