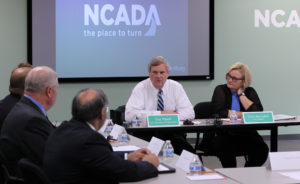 “We have to act. We have to focus on prevention. We have to expand treatment. We have to create communities of support for recovery,” says Vilsack. “We have to have criminal justice reform. We also have to have some economic development opportunities in rural areas where this is a particularly acute problem because there is a lack of treatment facilities.”

McCaskill and Senator Roy Blunt (R-Missouri) are working on legislation that would allow St. Louis County to access federal funding to create a prescription drug monitoring system, without the state legislature’s approval.

Missouri is the only state in the U.S. without a program that allows doctors and pharmacists to check how many prescriptions people are having filled – to look for cases of abuse.  McCaskill is fed up with Missouri legislators failing to create such a system.

“They have still, once again for the fifth or sixth time, refused to take this basic step,” says McCaskill.

Vilsack says not having a system in place has a far-reaching effect.

“It’s not just the folks in Missouri that are at risk because of a lack of monitoring program. It’s every state that surrounds Missouri. People from my home state of Iowa can come across the border,” says Vilsack.

One of the main opponents in the legislature is Senator Rob Schaaf (R-St. Joseph), who is a family physician. He says the program won’t catch those selling pharmaceuticals illegally. He also argues that more people die of alcohol abuse and the effects of smoking of cigarettes than will ever die of opioid overdose.