You are here: Home / Sports / No fractures after Holliday takes pitch to the nose–listed as day-to-day (VIDEO) 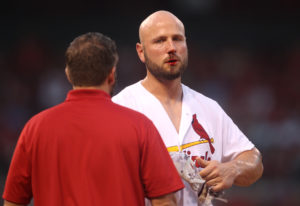 St. Louis Cardinals Matt Holliday leaves the game with head trainer Adam Olsen, after getting hit in the nose by San Diego Padres Andrew Cashner pitch in the sixth inning at Busch Stadium in St. Louis on July 22, 2016. Photo by Bill Greenblatt/UPI

Cardinals outfielder Matt Holliday left Thursday night’s 6-5 win over the San Diego Padres after getting hit on the nose by a pitch.

Holliday’s nose was not fractured, but has a scrape by his nose and upper lip. Manager Mike Matheny said Holliday didn’t have any concussion symptoms and he’s listed as day-to-day.

(Quick side note).  After you watch the pitch, go back and re-watch the video and follow HP ump Chris Guccione.  His eyes never leave the track of the ball, he never flinches, never blinks.  Catcher Derek Norris isn’t sure where the ball is going, he stabs his glove out to try to catch the ball, blinks and bails away.

I’m not ragging on Norris, that’s the normal human reaction, but Guccione is so trained, he doesn’t move…AMAZING

Watch the pitch that clipped Holliday