You are here: Home / Sports / Gave up on the #STLCards last night? You missed their rally over the Padres 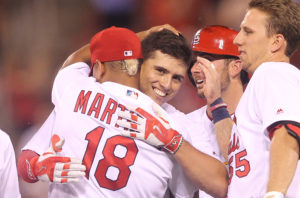 St. Louis Cardinals Aledmys Diaz is congratulated by teammates after hitting the winning single against the San Diego Padres in the ninth inning at Busch Stadium in St. Louis on July 21, 2016. St. Louis won the game 6-5. Photo by Bill Greenblatt/UPI

I admit, down 5-1 in the bottom of the eighth, I wrote off the Cardinals coming back against the San Diego Padres.

Yet they found a way to score five over the final two innings for a 6-5 win Thursday night at Busch Stadium.

Aledmys Diaz extended his on-base streak to 24 games and drove home the winning run to complete the come-from-behind win.

The Cardinals tied the game with a four-run eighth inning with an RBI single by Gyorko, followed by a three-run homer from Stephen Piscotty, his 14th.

Tommy Pham started the ninth inning off with a double, and the Padres intentionally walked Greg Garcia to bring up Jeremy Hazelbaker, who advanced the runners with a sacrifice bunt. The Padres were forced intentionally walk Gyorko and Diaz singled making him now 15-for-24 against Padres pitching.