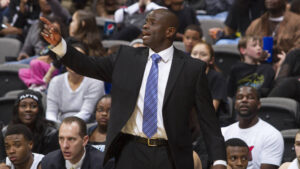 UMKC Director of Athletics Carla Wilson announced on Monday that the contract of Men’s Basketball Head Coach Kareem Richardson has been extended through the 2020-21 season.

“I can’t say enough about Kareem’s uncompromised commitment to competitiveness on the court and in the classroom,” Wilson said. “Under his leadership and direction, we continue to be very enthused about where he and his staff will take this program in the coming years.”

Richardson enters his fourth season at the helm of the ’Roos after leading UMKC to the semifinals of the conference tournament in back-to-back years for the first time since 2003 and 2004. Last season, UMKC finished with its best nonconference performance since 2010-11 with seven victories, including a win over Mississippi State, a year after taking down another SEC opponent and in-state foe Mizzou in Columbia.

Academically, Richardson’s teams have also excelled in the classroom. In each semester he has coached at UMKC, his teams have achieved a cumulative grade point average near or above 3.0. All of Richardson’s players completing eligibility at UMKC have graduated and the men’s basketball program boasts a single-year APR score of 1,000.

“I’m very excited about the continued trust and confidence that Chancellor Morton and Carla have in the direction our program is going,” Richardson said. “We are looking forward to this upcoming season and furthering our connection to our fan base in Kansas City and beyond.”

Under his direction, Martez Harrison (Kansas City, Mo.) was named WAC Player of the Year and honorable mention All-American in 2014-15. Harrison was also recognized as WAC Freshman of the Year in 2013-14. He ranks fourth all-time in scoring, second in assists and third in steals at UMKC. Last season, LaVell Boyd (Chicago, Ill.) was named to the WAC All-Newcomer team in his first season with the program after knocking down 81 shots from beyond the 3-point line.

UMKC will return to the hardwood in early November for the season opener.