Dillon Lawson was on Mizzou Baseball Head Coach Steve Bieser’s staff at SEMO for three years, until he accepted a job as hitting coach this past offseason with theTri-City Valleycats in the Houston Astros’ organization.  Back in January, Lawson told the Southeast Missourian, that Bieser is the “easiest person in the world to work for” and said pitching coach Lance Rhodes “is great at what he does but he’s an even better person.”

Now, Lawson will be reunited with both in Columbia.

Lawson announced on his Twitter feed that he is coming to Missouri as the Tigers new hitting coach. 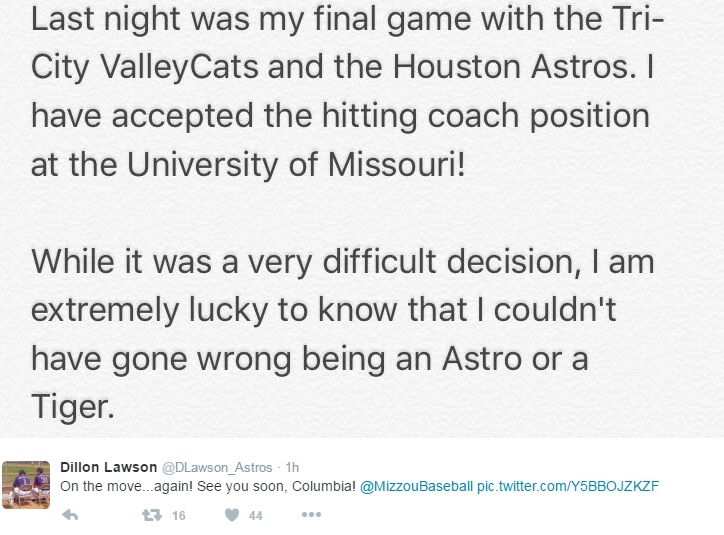 Prior to his time with the Astros, according to SEMO’s athletic website:

Lawson came to Southeast after serving as an assistant coach at Morehead State for three seasons (2010-12). He served as the Eagles’ pitching coach for two seasons before serving as the hitting coach in 2012, junior college recruiter and assisted in their strength and conditioning programs.

In 2012, Lawson helped guide the Eagles to their first winning season in five years. The Eagles also qualified for the OVC Tournament in 2012.

Prior to his time at Morehead State, Lawson spent time at Lindenwood University in St. Charles, Missouri from 2007-2009. He helped guide the Lions to back-to-back NAIA Regional Finals. Lawson coached one NAIA All-American and one Rawlings Gold Glove Award winner.

In the summers of 2010 and 2011 Lawson was a Head Coach at the IMG Baseball Academy Wood Bat League. He was also a pitching instructor for the entire league.

Lawson, a Louisville, Kentucky native, is a 2007 graduate of Transylvania University with a degree in Exercise Science. Lawson was a four-year starter for the Pioneers earning All-Conference honors as a junior and senior.