Missouri’s Athletic Director Mack Rhoades is leaving for the same position at Baylor University in Waco, TX. The site is also reporting an announcement was expected at the end of Wednesday.

The news of Rhoades departure came moments before Head Coach Barry Odom and the players were scheduled to speak at SEC Media Days in Birmingham.

“Guys are presented different opportunities & have to make best decision for what’s best for them,” said Odom, commenting on the news.  “My singular focus is on making sure that our football team is ready to go in 52 days.” 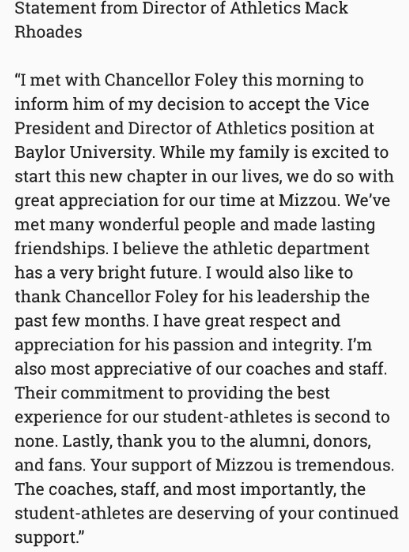 Is it the best move for Rhoades and what next for Missouri?  Watch below.  Share your thoughts with me on Twitter