(NASCAR)—Columbia’s Carl Edwards thought he’d saved enough fuel in the closing laps of the NASCAR race at Kentucky Speedway to get past leader Brad Keselowski late in the race and closed to Keselowski’s rear bumper on the back stretch of the last lap before Keselowski found just enough fumes to regain a little distance and finish a car length in front. 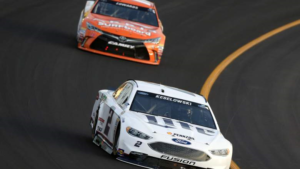 Edwards after the race credited Keselowski with finding just enough fuel to get the win but admitted the result was frustrating.

Joplin driver Jamie McMurray’s seventh place finish was good enough to put him back in the top 16 drivers who will start the run-off for the championship after eight more races.  But he has only a ten point cushion.

The next stop on the NASCAR tour is New Hampshire, where Edwards has started from the pole in the last two races and has finished fifth and seventh.  McMurray five top tens out of 26 starts.

(INDYCAR)—Josef Newgarden, less than a month after a horrifying crash at the Texas Speedway that left him with a broken right hand and a broken collarbone, set a new record for most laps led in an IndyCar race, dominating the 300-lap race in Newton, Iowa, a few miles east of Des Moines.  Newgarden took the lead from pole sitter Simon Pagenaud shortly after the green flag and had lapped all but one car by the time the race was one-third over.  He led 282 laps and finished well ahead of Will Power and Scott Dixon. Pagenaud came home fourth, one spot ahead of Mikhail Aleshin, the first Russian driver in IndyCar history.  They were the only cars still on the lead lap at the race’s end.

Newgarden was injured June 12 during the last previous oval race run by the series when he and Conor Daley collided at the Texas Speedway and Newgarden’s car slid on its side, the cockpit against the wall, for several yards. 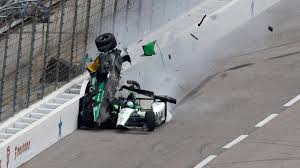 Newgarden’s win moves him from fifth to second place in the points standings.  Pagenaud’s pole was the 500th pole position start in all forms of racing for Team Penske.

IndyCar will be on the streets of Toronto next Sunday, one of six races left in the season.

(FORMULA ONE)—Nico Rosberg’s once-large points lead in Formula One is down to a single point after the British Grand Prix, won by teammate and challenger Lewis Hamilton. It’s Hamilton’s fourth British Grand Prix, tying him with Nigel Mansell.  Hamilton led every lap.  Rosberg was second under the checkered flag but was dropped to third after a ten-second penalty was assessed against him for getting an illegal radio communication from his crew.

Second place was awarded to Max Verstappen with Rosberg credited with third.

Rosberg had to reset his onboard computer systems with five laps to go when he his transmission stuck in seventh gear.  After the systems reset, he had to shift directly from sixth to eighth.  Race stewards said his Mercedes pit crew gave him excessive radio help in re-setting his car’s systems.

F1 takes next weekend off before the Grand Prix of Hungary on July 24.