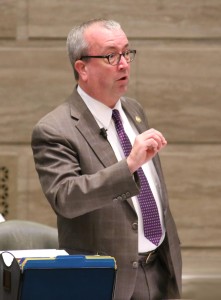 “Joe Keaveny has been well-respected by members from both sides of the aisle for his intellect and his leadership, and he will continue to provide that high level of public service to the people of Missouri as an administrative law judge,” says Nixon.

Administrative Law Judges have the authority to approve settlements or issue awards after a hearing relating to an injured worker’s entitlement to permanent benefits allowed by Missouri law.

Keaveny represented the 4th Senate District in the Missouri Senate since December 2009 when he was elected in a special election. He was re-elected to the seat in 2010 and 2014 and was on his way out of the chamber due to term limits.

For the future of the Senate, what Keaveny wants most is for Senators to find compromise and cooperate with one another.

Keaveny hopes that Democrats won’t have to block a vote on future issues as they have several times in recent sessions.

“The Senate functions best when both sides compromise. The filibuster is really a failure. I would hope that both sides could avoid a filibuster and come up with a compromise that nobody likes. Those are usually the best ones,” says Keaveny.

A special election will be held in November to fill Keaveny’s seat.