You are here: Home / Sports / Morales big night leads the Royals over the Cardinals in the I-70 series finale 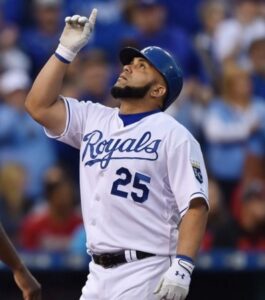 Another big night from Kendrys Morales lead the Kansas City Royals to a 4-2 victory over the St. Louis Cardinals in the I-70 Series finale at Busch Stadium Thursday night.

The Royals plated solo runs in the first and second innings before the Cardinals would cut the lead in half on Brandon Moss’ 17th homer of the season in the fourth. Jhonny Peralta’s solo homer in the sixth would account for the only other Cardinals tally. St. Louis struggled both at the plate with just three hits on the night and in the field committing three errors.

Dillon Gee picks up the win in relief as Mike Leake takes the loss. Wade Davis recorded his 19th save in 21 opportunities.

The Royals took the final two games, and three of four overall, in the honme and home series.