You are here: Home / Sports / Blues send Brian Elliott to Calgary in trade 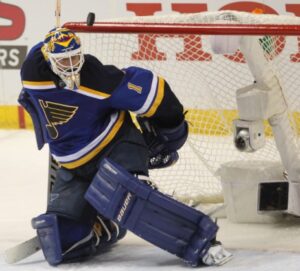 St. Louis Blues goaltender Brian Elliott loses sight of the puck on a San Jose Sharks shot in the third period of Game One of the NHL Western Conference Finals at the Scottrade Center in St. Louis on May 15, 2016. St. Louis won the game 2-1. Photo by Bill Greenblatt/UPI

The Blues have traded goaltender Brian Elliott to the Calgary Flames in exchange for a second-round pick in 2016 (35th overall) and a conditional third round pick in 2018.  The deal was made at the 2016 NHL Draft in Buffalo.