You are here: Home / News / Severe weather predicted for Missouri for Tuesday

High heat could help kick of severe weather tomorrow in mainly northwest Missouri, and that could include tornadoes. 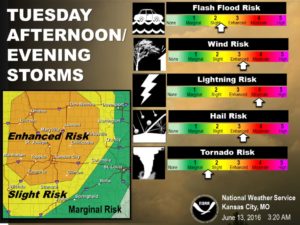 This graphic from the National Weather Service shows where the greatest threat of severe weather is predicted to be on Tuesday, and what threats are predicted.

“You’ll be able to sense that. It’ll be pretty hot and humid tomorrow afternoon,” said Bowman. “There’s a little bit of what we call a ‘trigger,’ with a boundary moving into the area, and that’s going to help be able to spark things off.”

The greatest threat for storms becoming severe is in northwest and north Missouri, but including much of central and western Missouri as well.

“Most likely strong damaging winds, large hail, of course lightning is always going to be a hazard. There is a potential for a few tornadoes,” said Bowman.

Storms are also expected to develop today that could produce gusty winds and lightning, but they are not expected to become severe.

The Weather Service encourages Missourians to seek the latest weather information and to take cover when warned to.