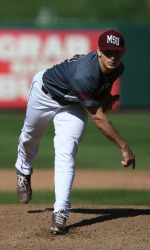 Missouri State pitcher Sam Perez was the first Missouri Valley Conference player to be chosen in the 2016 Major League Baseball First-Year Player Draft, as the Miami Marlins selected the senior right-hander in the fifth round with the 143rd overall pick on the second day of the 40-round amateur draft Friday afternoon.

With Perez’s selection by Miami, Missouri State extended an impressive string of talent production that has resulted in at least one Bear being picked in 30 of the last 31 MLB Drafts dating back to 1986. Overall, the Bears have produced 134 players who have gone on to sign professional contracts over their 53 years as a varsity program, including 114 during Keith Guttin’s 34-year tenure as head coach.

The Branson, Mo., product earned a pair of victories at the MVC Championship to reach the 20-win mark for his career and climbed to fifth on the Bears’ single-season strikeout chart, moving past three-time All-American Nick Petree on that list. He concluded his career with a 0.909 win percentage (20-2), matching Greg Reed for the best mark in the 53-year history of the program. Additionally, Perez became just the fourth MSU hurler to reach 80 career mound appearances and the 10th Bear to top the 100-strikeout plateau in a season.

Missouri State outfielder Spencer Johnson became the second Bear to be chosen in the 2016 Major League Baseball First-Year Player Draft, as the Houston Astros selected the senior in the 16th round with the 487th overall pick on the final day of the 40-round amateur draft Saturday afternoon.

A second-team All-Missouri Valley Conference selection and the Bears’ A.E. ‘Ted’ Willis MVP, Johnson enjoyed a banner senior campaign, launching an NCAA Division I-best 24 home runs to go along with career-best totals for RBIs (70), runs (56), triples (3) and total bases (157). The Springfield, Mo., product led the MVC in walks (46) and slugging percentage (.707) and ranked second in total bases and third in runs, RBIs and sacrifice flies (6). He was twice named Louisville Slugger National Player of the Week this spring, most notably following his April 6 performance vs. Kansas, in which he became the first Bear to homer three times in a game since 1999 and the first MSU player to drive in nine runs in 20 years.

Johnson capped his MSU career with a landmark run through the MVC Championship in Terre Haute, belting five home runs to earn most outstanding player recognition in leading the Bears to a runner-up finish. He completed his playing career in the No. 18 spot on MSU’s career hits list with 218, second on the Bears’ all-time walks chart (133) and ninth in career doubles (49). Additionally, his home run total this spring rates as the fifth-best in program history, while his 70 RBIs are the seventh-highest total ever for a Bear.